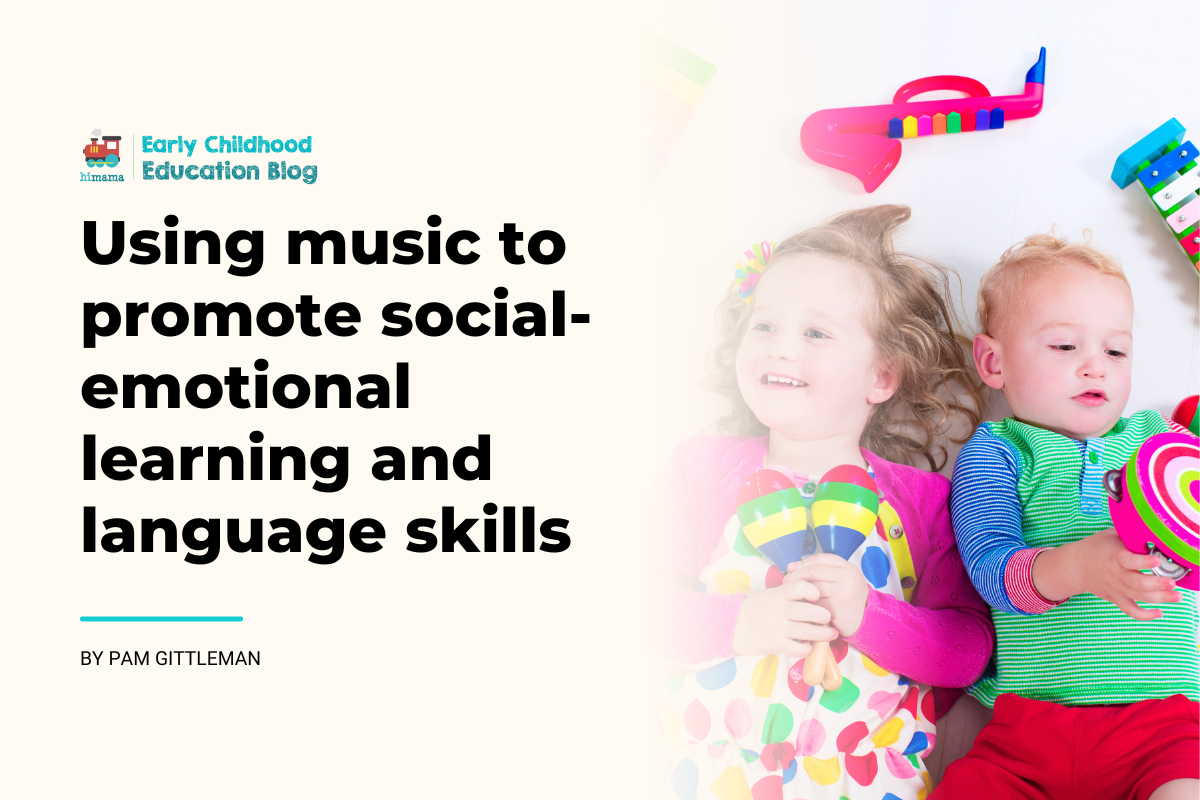 In a recent webinar on using music to promote social-emotional learning and language skills, we welcomed Pam Gittleman, educator and creator of For Kinder Times! Pam joined us to discuss the importance of social and emotional learning (SEL) in early childhood education, and how music plays a critical role in supporting SEL skill development. Pam shared tried and true strategies that she has deployed in early years classrooms, using music and stories to nurture both SEL and language acquisition skills.

Research has shown that music builds important connections across many regions of the brain needed to carry out the complex actions and interactions humans require in order to thrive. This impact starts right away. For example, there is evidence that one-day-old infants breathe differently when listening to Mozart versus Stravinsky, and it’s well-known that music soothes premature babies in hospital nurseries. In fact, the average infant will listen calmly to a lullaby for twice as long as to baby talk or adult speech. When parents and educators sing lullabies, they are using a combination of pitch, rhythm, and lyrics to soothe, teach language, communicate hope and affection, convey security, and develop and strengthen bonds.

The simple act of making music can also develop fine and large motor control. Making music is an intense, multisensory, engaging activity that adults and children can do together, laying the groundwork of sound patterns that humans are wired to be sensitive to in order to foster communication, language, and imagination.

Research indicates that children’s participation in musical activities correlates with positive feelings and facilitates their ability to regulate their emotions and behavior. Stopping/starting or slowing down/speeding up during a song requires self-regulation. Through music, children can invent games, songs, and stories that help them harness their feelings.

With its tempo, rhythms, verses, and choruses, music provides a structure that lays the foundation for learning rules and routines and practicing cooperation. Through music, children not only learn language and accents but also absorb the songs and stories, as well as the beliefs and values behind the lyrics, which help model the structures of social interactions.

1) Empathy circuits: can be improved through interpersonal music coordination

2) Oxytocin: contributes to our sense of feeling socially bonded with others and is secreted when people sing together

3) Dopamine: is released during musical anticipation and expectation which produces a sense of pleasure and is pivotal for our sense of reward and motivation

5) Cortisol: is a stress hormone that is decreased in the brain when people sing together and listen to music together in groups

In your classroom or home, listen to Five Little Ducks with your child and practice the following:

● Call-and-response/taking turns: Advise children not to sing or talk until they hear the words, “Mama Duck said.” Then have them respond with the quacking pattern, i.e. 4 quacks!

● Ask “How does Mama Duck feel after none of the ducks come back?” Ask them to point to and label the emoji that shows that emotion. Ask them to make that face.

● Ask “What kind of voice Mama Duck should use when she calls out to her missing ducklings?” Should it be loud or soft? Should it sound angry, scared, or hopeful?

● Ask “How do the baby ducks feel when they see their Mama again?” Prompt students to use different words to label that feeling. (happy, relieved, joyful, loving, etc.)

Humans have an innate sensitivity to sound patterns that allows music to foster communication, language, and imagination. Research shows that musical experiences in childhood can actually accelerate brain development in the areas of language acquisition and reading skills. Similar to the way music models social and emotional interactions, the structure of music with its tempos, rhythms, verses, and choruses also provides a foundation for learning the rules of language. Through music, children learn language, accents, and tones of voice.

Research supports the idea that learning language is a social process involving mirroring (imitation), interaction (“serve and return”), and phonetic discrimination which begins as early as 6 months of age. The role of rhyming, and specifically rhyming songs, in language acquisition from age 7 months on cannot be understated.

– builds phonological and phonemic awareness; judging whether two words have sounds in common

These skills lay the foundation for oral language and vocabulary development as well as for reading readiness.

An Example in Song: This Old Man promotes rhyming, phonemic/phonological awareness, structures and patterns of language, and LISTENING!

In your classroom or at home, sing the song This Old Man. Ask your child to come up with alternate rhymes for each number.

The development of social-emotional learning and language skills can and should be encouraged by educators, parents, and caregivers in early childhood. Music and stories are great vehicles for developing and practicing those skills with young children. You don’t need professional development to be a “professional” in supporting those skills. You don’t need a separate curriculum. This skill development can be easily integrated throughout the day at home and in childcare using music!

Pam Gittleman is the creator of For Kinder Times, a brand that is helping to raise kind kids, one rhyme at a time. Pam knows that young children love to listen to music, make music, and move their bodies to music, but she also knows that doing so plays an essential role in their development. A long-time early childhood music educator and curriculum developer, the 2021 Harvard Advanced Leadership Initiative (ALI) Senior Fellow has encouraged thousands of young children to make music together using songs that range from traditional nursery rhymes to contemporary classics. During her time at Harvard, she was inspired to create an updated collection of nursery rhymes that relate more closely to the lives and values of today’s families – and impart lasting lessons for a kinder, more connected world.