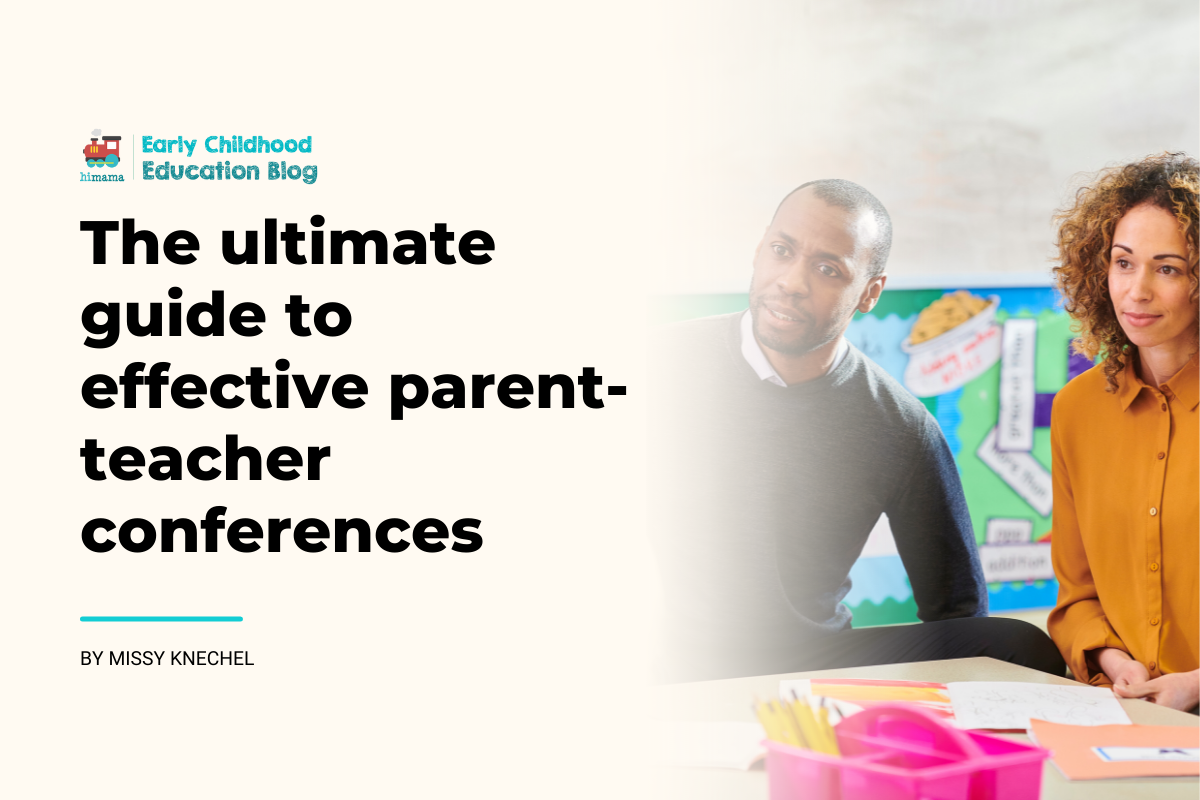 I’ll never forget my first preschool parent-teacher conference. I was a first-year Kindergarten educator, and I was so prepared. I was so confident. I had music playing, candles burning, refreshments, and activities for children if their parents ignored the rules and brought them; I was ready!

My room may have smelled nice, but I didn’t really think past that! I didn’t take into consideration the fact that on the other side of the table would be actual people who were ready to pounce on every word I said that could be critical or negative. Why didn’t they teach me about this in college? I didn’t sign up for this!! I walked in the door after that first day of conferences, and you would think I had just been in a brawl. I was disheveled, exhausted, and defeated.

After that dreadful experience, I got smart and became proactive. I was going to find a way to make these conferences enjoyable!

Here’s how to be prepared for your next preschool parent-teacher conference:

Preschool parent conferences should be more of a “catch-up” conversation. This is not the venue for surprise information. Parents will feel ambushed and leave defeated, respecting you less.

The only way to ensure this doesn’t happen is to make sure that your communication is ongoing. This takes extra effort on the educators’ part, but it makes all the difference. Email, call, send notes home, etc. on a regular basis so that when it comes time for conferences, there is more ease and fewer defenses up. I have even done “house calls,” where I schedule a day where I visit at the child’s house for a few minutes! The children LOVE it, and the parents appreciate it. Hint: I never stayed longer than 15 minutes so that it wasn’t awkward or inappropriate.

If you have concerns to share about a child, be sure to have mini conversations leading up to this main parent-teacher conference. This is a time for highlighting progress, not dropping a bomb in the parent’s lap!

You must have a plan going into the conference. My rule of thumb is that every parent conference lasts no more than 20 minutes. Anything more than that tends to go off track, and you start to talk in circles.

Keep it professional, succinct, and helpful. Have some kind of conference form for the parent to walk away with (see here for what I use), and always have goals/next steps for the child. Tip: I like to keep one or two goals left blank on the sheet so that the parent can add to it and feel part of the plan.

Also, this should go without saying, but be on time! Be respectful of parents waiting for your next appointment. If you can tell that a conference needs more time, simply tell the parent that you have someone waiting, and you would be happy to continue this conversation at another time. Don’t forget to follow up though!

It’s important to start with the positive aspects of the child. What are their strengths academically as well as socially/emotionally? Start off with those and then ease into the concerns and areas for growth.

Try not to sugarcoat or downplay something if it is a legitimate concern. Hard conversations can be, well, hard! Remember, there shouldn’t be surprises, so the concerns brought up should be expected.

End the conference with another positive aspect of the child. Give more specific examples like, “Billy loves to help friends at clean-up time” rather than “Billy is helpful.” The more specific, the better!

Use specific examples rather than broad, generic statements when referring to a child’s progress. The more specific you can be, the better it will be received. For example, if a child has improved greatly with gross motor skills, say, “Sophie was able to go up and down the stairs using the railing without any assistance the other day” rather than just saying “Sophie’s gross motor skills are improving.”

Giving concrete examples of what the child has mastered and what is being worked on can help the parent truly understand. So, when you want to see improvement in areas, be direct while still being sensitive. Instead of saying, “Nate is having issues with speech, but I’m sure he’ll be fine,” say, “As you know from previous conversations, I am having a hard time understanding what Nate is trying to say most of the time, and so are his friends. I can tell he is frustrated, and I would love to see if there are some resources for him to improve his speech skills. Would you like for me to get you some information on services that are available for him?” Specific examples and goals eliminate confusion and help set the parents up for success.

Whether your center has designated days on the school calendar or you have to come up with your own, be sure to space parent conferences out so you have time to breathe, eat, drink coffee, and let’s face it- use the bathroom!

One of my rookie mistakes as a first-year educator was doing all 19 conferences in two days. I did them back-to-back before and after class and never allowed myself a minute to catch my breath. Don’t make that mistake. Schedule yourself a few breaks!

Hopefully, after putting some of these tips into practice, you can avoid my rookie mistakes from that first year. Conferences should be “just another conversation,” so do your part in keeping communication open and consistent so that it doesn’t become daunting. Conferences help show that parents and educators are on the same team with the same goal in mind- to set their children up for success academically, socially, and emotionally. You’ve got this!

Missy is a professor in the early childhood department at Eastern University and director of Victory Early Learning Academy, a childcare center that she started ten years ago. Prior to that, she taught Kindergarten and second grade for a total of 10 years. She has been married to her best friend, Jason, for 18 years, and together they have four beautiful children ages 8, 9, 12 and 13 in the suburbs of Philadelphia, PA. In her spare time, Missy loves to bake, read historical fiction, sing karaoke and travel to Central America on short term missions.