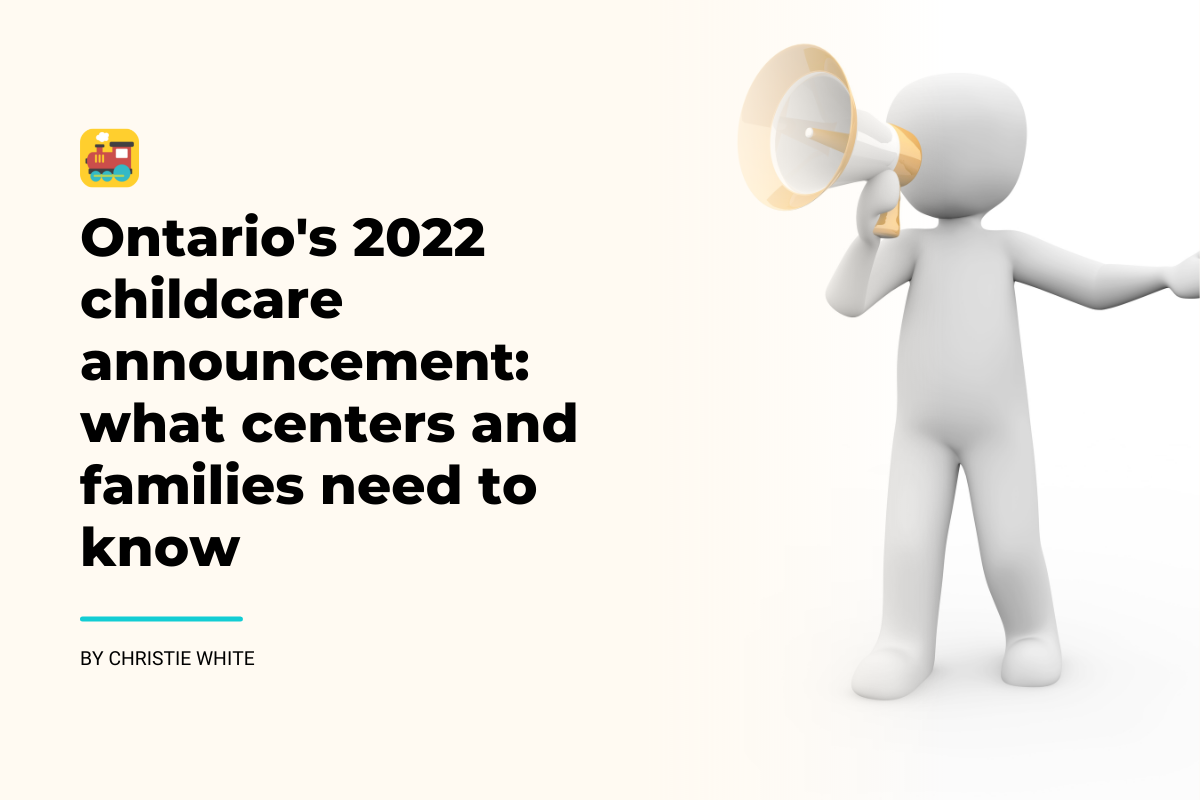 About a year ago, the Canadian federal government announced $30 billion in funding for early learning and childcare programs across Canada, with the vision of providing a national childcare program for all Canadians as part of their federal budget.

The announcement was driven by delivering on a long-promised national childcare program and providing support to empower parents to return to work after COVID-19. Women, in particular, have been hardest hit by unemployment due to COVID-19 as many have not been able to re-enter the workforce due to needing to take care of their children.

While there have been developments in other provinces, Ontario has been the last to sign an agreement.

Summary of the Ontario childcare agreement

As of March 28, 2022, the province of Ontario and the federal government have signed a $13.2 billion agreement to lower the cost of childcare in the province to an average of $10 a day by September 2025. The $13.2 billion will be delivered over six years, with an additional year of funding of at least $2.9 billion.

A news release issued on March 28th, 2022 by the Ontario Ministry of Education said the deal includes “flexibility to allocate federal funding in a way that will allow the province to deliver an average of $10 a day child care, including spending the initial $10.2 billion over four years instead of five.”

According to the Ministry of Health, Ontario childcare fees will be reduced up to 25% as of April 2022 with a further 25% reduction scheduled for December 2022.

Childcare tuitions in Ontario are among the highest in the country, with a full-time spot for a toddler in downtown Toronto typically costing around $1,600 a month, in the range of $70 a day. Infant daycare costs more, and even childcare for preschool children can bring fees approaching $60 per day (source).

“That’s my opinion,” Ford said. “The job is very, very difficult. It’s a job I wouldn’t be able to do. You know, they have a special skill set and they deserve to get paid appropriately and we’ll work as quickly as possible and collaborate with stakeholders.”

According to the agreement, the Ontario childcare tax credit program will also continue, and the province said it will work with municipalities to enroll 5,000 licensed childcare centers and home childcare providers into the program between now and Sept. 1, 2022.

Ontario’s Education Minister Stephen Lecce said individual childcare operators will have to enroll in the program and will receive an “automatic benefit and savings on a monthly basis.”

It’s likely to take a number of weeks or even months before the money would start flowing to childcare facilities to bring down the price that parents pay. However, parents would eventually be able to expect a retroactive refund of 25% of their childcare costs incurred from April 1, 2022, until the sticker price comes down.

How do parents and educators feel about this update?

The general consensus from educators and parents alike is some confusion and a lack of detailed understanding. Parents seem to be understandably excited about the cost savings they can expect but are unclear about how exactly this will all play out.

Educators, on the other hand, seem to be quite worried. They are not sure how their salaries will be able to remain the same, let alone increase. They are also worried about the recruitment of new educators and enticing new graduates into the field. Lowering the cost of childcare can traditionally have negative impacts on educators such as lack of materials, wage increases, sufficient staffing levels, and support. They are worried about how this funding will play out and ensuring that it will benefit them adequately.

In one example, Carolyn is the Policy Coordinator for the Ontario Coalition for Better Child Care. They are Ontario’s central advocacy group for a universal, affordable, high-quality, public, and non-profit system of early childhood education and care. Here is what she has to say:

The federal budget commitment by Finance Minister Chrystia Freeland is a historic turning point that will build the system that so many childcare activists have worked for decades to push for. It’s sad that it has taken a pandemic for everyone to finally grasp how important early learning and care is, but we don’t have a moment to waste. We must all roll up our sleeves to rebuild the Ontario childcare sector and make a real difference for families, for educators, and for a generation of young children who deserve to look to a brighter future.

This makes me incredibly anxious. We are a not-for-profit and we aren’t adequately funded NOW, how are they going to adequately fund us with these new parameters?

More developments will continue to arise as this agreement starts coming into effect. Please share your thoughts and feelings in the comments below!