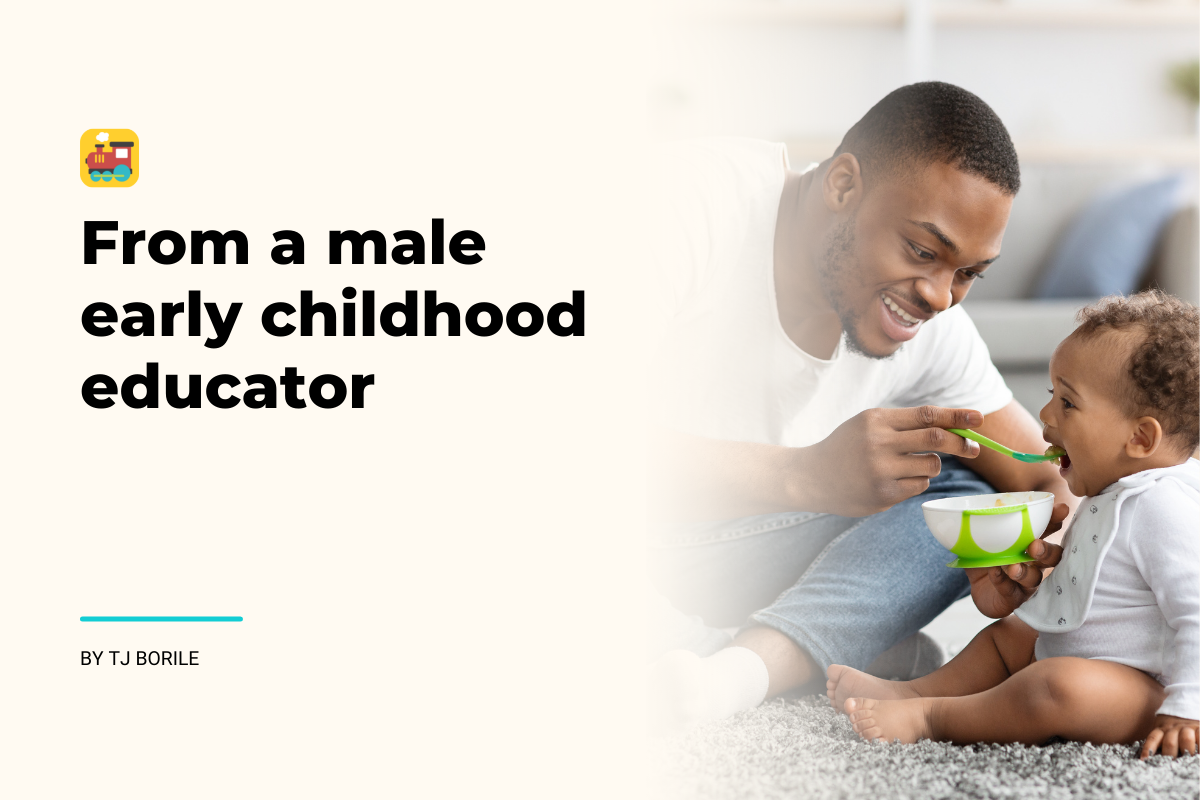 “Thank goodness that you’re back,” my room partner said to me as I walked into the classroom, “There was a mouse! And we didn’t know what to do!”

“I wouldn’t know what to do about it either” I responded.

To give context, my room partner, much like the majority of early childhood educators, was female. And I’m a male – one who happens to have a genuine fear of rodents, and were I in the room during the mouse hunt, would’ve been just as squeamish.

This is a snapshot of how it is for me as a male early childhood professional. There’s an expectation to do the traditionally masculine portions of the job – like minor plumbing for instance – and some shock when I can’t do them well. Regardless of my skills and experiences as an educator, my role in the center can be unwittingly treated as a novelty factor for diversity.

Before I continue, I’d like to recognize that I’m a cisgender male who walks through the world with a certain level of privilege that’s inaccessible to my female colleagues. The intention isn’t to center my stories in a way that supersedes theirs. It’s merely an opportunity to share some personal lived experiences that may not always be visible. Also, please know that I love being an educator. However, there have been some detrimental moments in my career that have a wide scope; from micro-aggressions (like the time I was tending to a hurt child in the playground and his approaching mom screamed “you don’t know that man!”), to experiencing the societal biases and stigmas attached to male educators. They’re not incredibly damaging, but they’re enough to add more difficulties to an already challenging job, regardless of someone’s gender.

Why male educators are a benefit to your program

I heard it throughout college, and as I entered the sector professionally: “It’s so nice to have a male presence in the classroom”. It felt good. However, when pressed for details as to why it was so nice, most responses were ambiguous: “It’s just the energy” or “It’s just nice to hear a deeper voice”. Fair enough.

Eventually, I began to notice the value myself. Having a male educator in the classroom is indeed, a benefit: for the children who don’t have father figures at home, for more representation, for a richer interpersonal connection between genders that can be modeled for the children. Childcare advocates have identified that having more males is an asset to the sector as a whole. We, unfortunately, still live in a world where the optics of having more men in a workforce equates to a certain level of professionalism.

These are pretty concrete benefits, so I’ve always found it curious that they were difficult to articulate in a conversation. Perhaps the reasons can be found in the time I volunteered for a childcare advocacy group. I put forth some male-centric issues to address and my leader told me: “We’re still fighting for female issues so I don’t even want to deal with the male ones right now”. Fair enough.

The stigma attached to male educators

A number of my peers who are male educators have dealt with parents who asked them not to change diapers or have outright expressed discomfort with having them in the classroom. The stigma of male educators is well known and I constantly find myself adopting strategies to counter it.

I vigorously introduce myself to parents right away and often work extra hard to build a relationship with them. Granted, this type of relationship building is considered a best practice for any educator, though I do wonder if my female counterparts have to place such a large emphasis on making it a part of their professional identity.”

Despite these strategies, there was still a time in my career when a school-aged child told his parents that I had touched him inappropriately. Let me say emphatically: I did not. The investigation took three weeks, during which I was instructed to stay away from the center and to cease communication with my peers. I reached out to old professors and former leaders for help, only to be met with silence, and I spent most of the days riding the subway aimlessly while worrying about my future. Eventually, the child admitted he wasn’t telling the truth and I was cleared of all charges.

Though it has been many years, and I have mostly healed from the trauma of living every educator’s worst nightmare, that last paragraph was still very difficult to write. As I reflect on the experience, a few questions remain unanswered. Was I a target for the child because he had an awareness of the stigma male educators faced? Was it learned behavior from the people in his environment? And with regard to the cold silence I was given during the investigation: would it have been different if I were female?

“But you’re a strong guy,” a supervisor once said to me, “And a young man. You’re okay”.

This was her response after I asked for help because my mental health was declining due to my workload. Actually, her initial response was to laugh, and the statement above was her attempt at a recovery. Thankfully, I had the wherewithal to escalate the situation as needed, and I had access to some therapy and external help where this was concerned.

The decline of early childhood professionals’ well-being is heavily documented and has been an ongoing challenge for all members of the sector. If there is an unconscious bias that males are better suited to handle the pressures, then this notion is damaging. The societal construct of masculinity isn’t a shield, especially in an early years environment where socio-emotional development is such a focus.

Men in childcare have the capacity to exhibit a soft and nurturing disposition that’s often associated with women, so like anyone else, it needs to be taken seriously when they ask for help.

Fortunately, these instances are but a fraction of my entire experience as an educator. There are far more portions of my career that fill me with joy and make me feel grateful for this work. It also occurs to me that my experiences may not even be specific to men; any early childhood educator can identify with being treated as an afterthought, the fear of false accusations, and the effects of deteriorating mental health.

Gender-based social constructs and conditioning have to be broken because this can happen to any of us.”

I often think about the children in our care, and how despite expected developmental domains, the number one thing we need to do is to treat each child as an individual.  If this is considered a healthy and productive way to care for a child, shouldn’t we do the same for one another?

TJ is a registered Early Childhood Educator with 5 years of experience, aspiring children's book author, and apple cider vinegar connoisseur. He loves hiking, meditation, watching animals in their natural habitat, and dancing to 90s hip hop and RNB. He currently lives in Toronto with his husband, where they have been bickering about whether they should get a dog or not for the past four years.