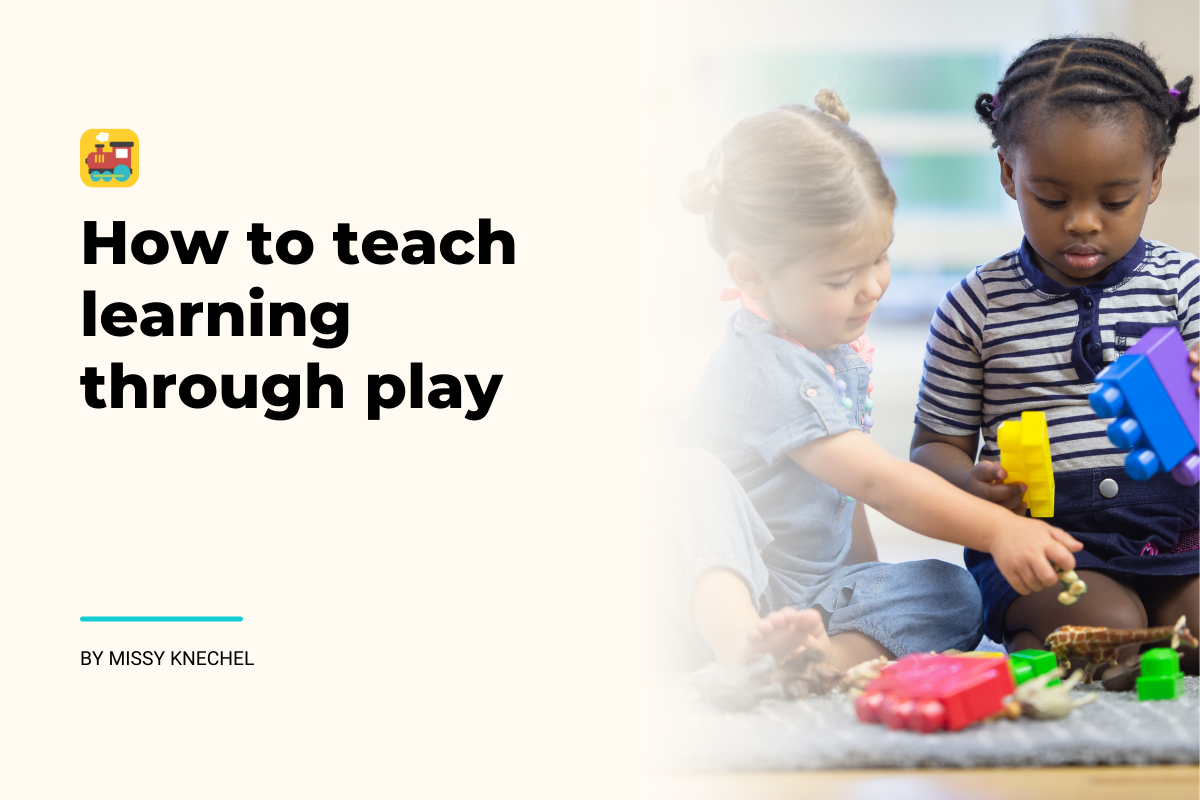 We hear people say all the time, “Play is important. Play is necessary. Let them play.” But sometimes as educators, we feel like we don’t know how to do it well. We have so much we have to get done that play sometimes can happen “when we are done” and only when children are outside. It’s important to know that play in its truest form is usually unstructured and child-led.

You can have all the best toys and tools in the world, but how you are presenting them in the classroom makes all the difference.

Play isn’t just about fun, even though it certainly is that! Play literally helps the brain develop in fascinating and important ways.

It is so important that as an educator, you create an environment where play is the focus. According to wonderful philosophers who paved the way for us in education, such as Jean Piaget, Maria Montessori, Arnold Gesell, and Lev Vygotsky, we learn that play is vital to a child’s development. Vygotsky taught us that when a child is engaged in pretend play, they act as if they are a head taller than themselves. This can only be done well by providing the “blank canvas” for our young learners and handing them the “paintbrush” (as opposed to something restrictive like a color-by-number!).

Play isn’t something that keeps children busy. I hear parents say to their children all the time, “go play so I can get some work done.” Ha, I’m guilty of that as a parent as well! But there’s so much more to play and the effects it has on children. According to Peg Olieveira, Executive Director of Gesell Institute at Yale, “developmentally appropriate play with parents and peers is an opportunity to promote the social-emotional, cognitive, language and self-regulation skills that build executive function and a prosocial brain.”

How can you incorporate play into your classroom?

Have plenty of accessible, open-ended materials.

In order for a child to activate their imagination and show skills like problem solving and creativity, there should be plenty of open-ended materials like blocks, sand tables, water tables, stones, sticks, tissue paper, marbles, dolls, small figures, etc. When you only have close-ended materials like shape sorters, puzzles, electronic computer toys, etc., it shows a definitive end to the activity. There are benefits to close-ended materials, but the majority of the materials in the early childhood classroom should be open-ended and inviting.

Make sure all of these materials are accessible to children. There is nothing that boils my blood more than when I see all of the shelves turned around or all of the materials up high where children can’t reach. This sends the message that they can handle it and that you have to control it. (However, I totally understand the need to hide glitter!). You’ll be tempted to only bring the easel and paint out every so often because it gets messy, but try having it out all the time! Trust me- you’ll be so glad you did. Once the novelty of having access to everything wears off, children will feel empowered and trusted. They have to earn that trust of course, but the only way to practice that is to give access little by little to the point where everything is available eventually.

Allow for at least one hour of uninterrupted playtime multiple times per day.

There is nothing more frustrating than playtime that is too short. All too often I see educators feeling the need to move kids from activity to activity, often the whole group and often not age-appropriate. Children need time to “get into” their play. After about 10 minutes, I usually see children truly engaging in what they are doing and in full play mode. If after that point they hear the teacher ring the bell or flash the lights and give a five-minute warning, that can create panic and anxiety where the creativity might stop and the child will be frustrated. Trust me- if you were put in their situation as an adult and only given a few minutes to do a fun activity, you would be frustrated, too!

A lot of teachers will say, “there isn’t enough time for me to get all my lesson plans done and allow for this much play.” Well my response to that is to change your thinking. If done correctly and appropriately, learning centers and one uninterrupted hour of free play will allow for you to get ALL of your curriculum done in the most fun and organic way! You’ll get math, science, social/emotional, language, fine and gross motor, not to mention the arts all by allowing children to explore the classroom in free play.

Do not structure pretend play.

It is always so tempting for educators to control what happens in centers, especially dramatic play or art centers. We love to have it organized and very specific, which can put children “in a box” and stifle creativity. For example, in your dramatic play center, you will be tempted to turn it into a very specific theme like a grocery store. Is that a bad thing? NO! But don’t be so rigid as to how they operate. Sometimes children may see another option to play, and it’s important to allow for that.  This will strengthen executive functioning and problem solving skills. If it is set up like a grocery store and a child wants to pretend it’s a restaurant or a park, let them explore! Don’t make them wear specific costumes that are only meant for that one particular thing. Stand back and observe how they can be so creative and have the best time doing it!

When it comes to your art center, it will be tempting to have children work on a specific project with a specific example. This is NOT developmentally appropriate nor is it helpful for children to create.

Having open ended materials with an objective in mind is the way to go. See what they can make and create. Instead of a specific example of a cardinal that you made for children to recreate in your theme on birds, have different photos of cardinals and all kinds of materials that would allow for children to create their own version of one. Maybe they will draw, maybe they will paint. Maybe they will sculpt. Giving them the option and control to create is far more beneficial than creating a cookie-cutter, step-by-step paper cardinal that will just end up in the trash later (that may seem harsh, but we all know it’s true!).

Be flexible with allowing children to use materials from different stations.

It is my favorite thing to observe when I see a child using a banana as a phone or a pretend piano as a laptop. This shows that they are problem-solving and using props as symbols in pretend play. Sometimes when I’m visiting other preschools, I notice that children are not allowed to mix toys from one center with another, the main reason being organization and keeping order. While I totally understand that, let’s all try to loosen up a bit. If a child is in the dramatic play center and would like a “phone” because she is pretending to work in an office, but there is no phone, and they think to go to the block center and get the block shaped like an arch to be the phone, just allow it! Ask them to return it when they are done. It’s that simple. Then, be sure to praise that child for both thinking of the idea and following directions by putting it back later.

Facilitate, but do not dictate.

Depending on the age group you teach, children will need more help than others with free and pretend play. For two and three-year-olds, you may need to facilitate more by giving suggestions, asking lots of questions, and modeling how to play.  For four and five-year-olds, it’s important to just facilitate, observe, and let the magic happen. Magda Gerber says, “Do less. Observe more. Enjoy most.” Children do not need a “helicopter” educator who controls everything they do. Allow for children to explore and even fail at times! This is how they will learn and grow. You have to foster an environment that shows them that you are there for them but that you are not controlling how they play. Trust me- you will be tempted to say, “oh no, Billy, let’s not put the toys there,” or “Maddie, that’s not how you wear that mermaid costume.” But if you control all of these things all the time, this sends the message that they are not capable of coming up with ideas themselves. This is where true self-confidence is ignited and can grow. The difference between a child who wants to go to school and a child who fights every morning is all about the peaceful, welcoming and fun environment we have to offer them each day.

Note: It goes without saying, but you should always intervene if something is dangerous or unsafe. So when I say to observe and facilitate, that comes with knowing that there may be times when you will need to step in and give instruction or correction based on safety.

So, in a nutshell, developmentally appropriate play helps the whole child; promoting development in all areas, especially that of the brain for executive functioning skills later in life. Wow! That is so wild to me when I read that. When I allow a child to play in the classroom, I am helping them learn skills that they will use later in life, most times far more helpful than if I had lectured or had them fill out a worksheet. When I control each and every move they make, I am sending a message that says they can’t do anything themselves and shouldn’t take initiative. So instead, let’s allow our children to lead the way in their play. Will it get messy? Yep. (Cue glitter for days!) Will it get frustrating? Sometimes. Will it be beneficial? Oh yes, in more ways than you can count. This won’t all happen overnight, but as you start little by little with some of the above suggestions, you’ll get there, and you’ll be able to confidently say that you helped a child gain lifelong skills; all because you let them play.

Missy is a professor in the early childhood department at Eastern University and director of Victory Early Learning Academy, a childcare center that she started ten years ago. Prior to that, she taught Kindergarten and second grade for a total of 10 years. She has been married to her best friend, Jason, for 18 years, and together they have four beautiful children ages 8, 9, 12 and 13 in the suburbs of Philadelphia, PA. In her spare time, Missy loves to bake, read historical fiction, sing karaoke and travel to Central America on short term missions.