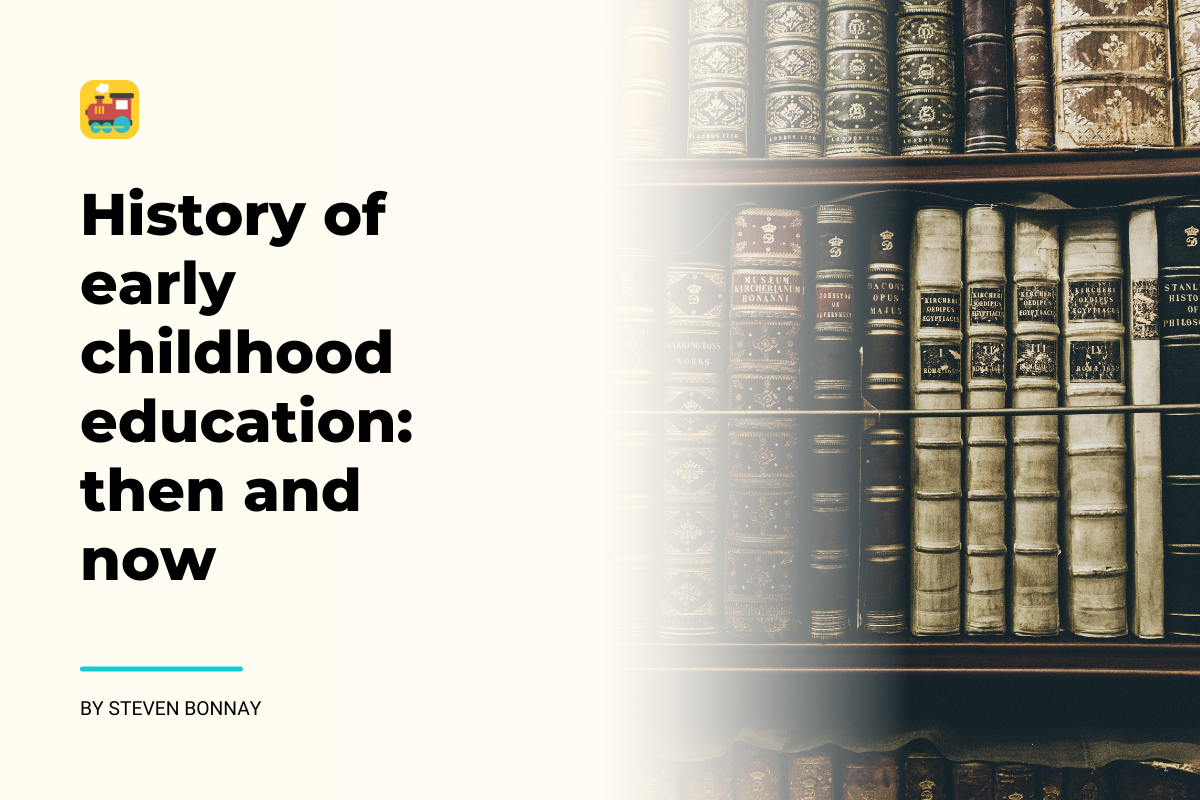 A history of early childhood education

The roots of early childhood education go as far back as the early 1500s, where the concept of educating children was attributed to Martin Luther (1483-1546). Back then, very few people knew how to read and many were illiterate. Martin Luther believed that education should be universal and made it a point to emphasize that education strengthened the family as well as the community. Luther believed that children should be educated to read independently so that they could have access to the Bible. This meant that teaching children how to read at an early age would be a strong benefit to society.

Building on this idea, the next individual who contributed to the early beginnings of early childhood education was John Amos Comenius (1592- 1670), who strongly believed that learning for children is rooted in sensory exploration. Comenius wrote the first children’s picture book to promote literacy.

Then there was John Locke (1632- 1704), who penned the famous term “blank slate”, also known as tabula rasa, which postulated that is how children start out and the environment fills their metaphorical “slate”.

A major influencer was Friedrich Froebel (1782 – 1852), who believed that children learn through play. He designed teacher training where he emphasized the importance of observation and developing programs and activities based on the child’s skill level and readiness. Froebel formalized the early childhood setting as well as founded the first kindergarten.

Further building from this concept, Maria Montessori (1870-1952) viewed children as a source of knowledge and the educator as a social engineer. She reviewed education as a means to enhance children’s lives, meaning the learning environment is just as important as learning itself. She took the position that children’s senses should be educated first and then the children’s intellect afterward. The Montessori Method is an internationally recognized model of educating children.

Jean Piaget (1896-1980) established a theory of learning where children’s development is broken down into a series of stages (sensory-motor, preoperational, concrete operation). Piaget theorized that children learn through direct and active interaction with the environment.

Lev Vygotsky (1896-1934) proposed a socio-cultural position for the development of children. He believed that social interaction provides a medium for cognitive, social, and linguistic development in children. Vygotsky believed that children learn through scaffolding their skills; this meant a more capable member of the community/society would assist the child in completing tasks that were within or just above the child’s capability, which is also known as the zone of proximal development. Vygotsky emphasized collaboration and the implementation of mixed-age groupings of children to support knowledge/skill acquisition.

John Dewey (1859-1952) strongly believed that learning should originate from the interests of children, which is foundational to the project’s approach. The educator is there to promote their interests for discovery and inquiry. Dewey saw the classroom as a place to foster social consciousness and thus the classroom should be democratically run.

Rudolf Steiner (1861-1925), the creator of what is now known as the Waldorf education philosophy and schools, focused on developing free and morally responsible individuals with a high level of social competence. Steiner broke this down into three developmental stages; preschool to age 6 (experiential education), age 6-14 (formal education), and ages 14+ (conceptual/academic education).

Erik Erikson (1902-1994) developed psychosocial stages of development for children where the parent and educator play a pivotal role in supporting the child’s success in every stage for a positive outcome. Erikson stressed that the ordinance of social-emotional development is a key component of the early childhood curriculum.

Loris Malaguzzi (1920-1994), the founder of the Reggio Emilia approach, based on the original childcare center opened in the town of Reggio Emilia, was a strong believer in documenting the children’s learning and interests which the educators would base their programming around on for the following days.

David Weikart (1931-2003), the founder of HighScope, which drew from the theories of Piaget, Dewey, and Vygotsky, primarily focused on the child’s intellectual maturation. The landmark study that earned HighScope validity was the Perry Preschool Project in 1962. A randomized controlled study of 123 children of similar skill levels entered the study, split into two groups; one receiving HighScope instruction while the control group did not receive it, but continued the traditional process. Results indicated an increase in academic success, academic adherence, and an increase in wages.

In general, the theorists for early education all would like to see the achievement of a common goal—to see the successful development of children in their primary years. How that goal is achieved differs in the structure of each curriculum.

This educational method is based on certain topics that may arise from different sources, such as seasonal/weather changes, upcoming events, interests of the educator, and religious events. Theme-based learning can also have direct instruction roots. Learning is not based on the qualitative interests of the child, but rather the quantitative delivery of content by the teacher. That means program planning can be done weeks and months ahead of time. The advantage of this is that the educator knows exactly what they’re teaching. A disadvantage is that what they’re teaching may not be of interest to the child at the moment, causing them to be disengaged. Classroom learning is very structured and contingent on the current theme. That means that all the material in the classroom would have some relevance/connection to the theme at hand.

Montessori-based childcare centers are available globally. Since Montessori is a very specific style, there is also a governing body for Montessori schools and educators through which they should have their certification. This is important to note since centers may declare themselves as “Montessori” while not really adhering to the true delivery of the Montessori Method. When considering putting your child in a Montessori classroom, be aware that the classroom is structured towards the individual child and their interests. This means that the children in the classroom are given the autonomy to learn and use the material in the classroom independently. This may not be effective for all children, who may require more of a structured learning environment. There may also be transitional challenges later on when moving onto traditional or “mainstream” schools.

This method is also very unique where learning opportunities are broken down into three major components—the “plan-do-review” process to learning. Children will take a certain amount of time to plan out what they will do before acting upon it. This involves describing the materials they will use to other children they will be interacting with. When the children “do”, they execute their plan in a very purposeful way. Following the activity, they “review” or discuss with an adult and/or other children what they did and what they learned.

HighScope looks to assess the child based on anecdotal notes broken down by the following categories:

At parent conferences, these anecdotes are shared with the parents to demonstrate learning is happening within these different categories. HighScope centers should be accredited through the HighScope governing body much the same as Montessori schools, where they can label themselves as HighScope yet not truly adhere to or be recognized as accredited.

This approach focuses heavily on documenting the children’s learning as well as allowing the children to really take on their interests. The parents and educators as a community are there to support the learning process of the child over time that they are there at a Reggio-inspired centre. The learning is broken up into projects that are open-ended. Children are given certain concepts that they need to solve through research, questioning and experimentation. There is a strong focus on the arts, which is a vehicle to allow the child to express their thoughts and emotions through multiple mediums. Reggio also looks to expose the children to nature, which means there is a lot of outdoor play in environments that promote using natural items from the environment to be incorporated into their play. There are no standardized tests and learning is demonstrated through the projects that they explored, which is documented by the educators.

In this educational method, children are exposed to a humanitarian, socially responsible and compassionate mode of approaching the world. Typically the educator that works with one group of children will be with that same group as they get older and go from one grade to the next. The arts and academics are fused together within the lessons. These schools are also zero technology in the classroom and exposure for the children. This methodology does, however, only focus on reading when the child reaches the age of seven, with emphasis on storytelling and learning through play. Part of the Waldorf teacher training is learning about anthroposophy, developed by Rudolf Steiner.

Given the variety of approaches to early childhood education, it begs the question: which one is the best? Or, more appropriately, does one method hold sway over another? The short, and perhaps frustrating answer is: it depends. Some programs prefer a traditional approach, adhering to a pure curriculum. Montessori and Waldorf are both approaches that can be sustained well beyond the early childhood level and into high school.

That being said, it is important to understand that methods and pedagogies are frameworks that can inspire practice rather than be a cut-and-dry rubric. In the present moment, it is increasingly the case where programs adopt a blended approach incorporating two or more methods in their program. This is due to the fact that there are distinct advantages to curating aspects from each available method, and adapting it to engage children.

Imagine a curriculum built from a combination of the different methods that allows teachers to strike a balance between instructional teaching and constructive learning. Taking this experiment further, one could technically draw on Reggio for its community and documentation; Montessori for its independent self-directed studies; Waldorf for its integration of the arts and social consciousness and lastly; High Scope for its invaluable three-step process to ensure purposeful, planned and reflected learning processes.

Ultimately, the choice of curriculum boils down to the mission of a center. Is the goal to foster community, or to bring structure and process, or to bring children back to nature, or something entirely new? These are the questions that will help curate a curriculum!

No matter which learning philosophy is followed, all of them share one very important practice: observation. Check out our post on the importance of observation in early childhood to learn more!

Steven Bonnay is a Registered Early Childhood Educator who contributes to our blog as a feature writer. He completed his ECE diploma and postgrad certificate in autism and behavior studies at Seneca College. Steven has worked both at the Seneca Lab School and as a part-time field placement professor before joining our team.