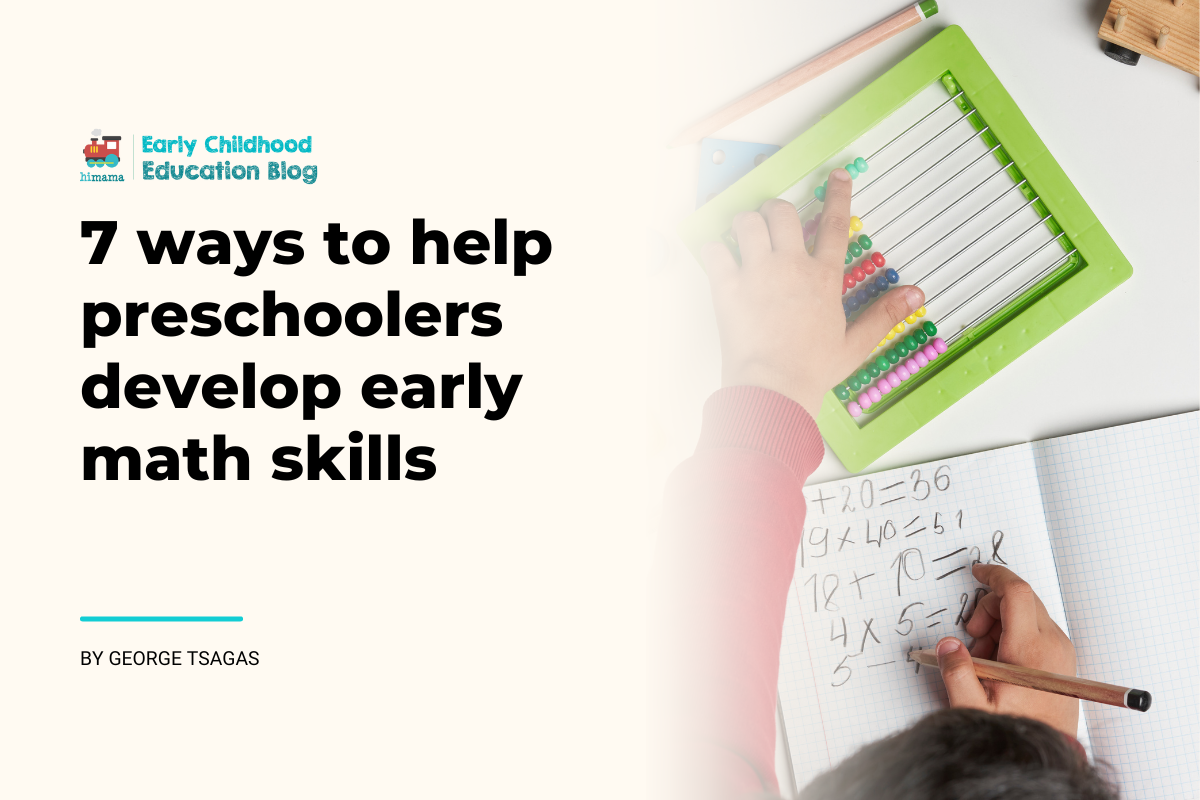 Only 58 seconds out of six hours.

That’s how little time per day, on average, preschools dedicate to math learning. Another study on math in the early years found that 60% of 3-year-olds had zero math experience from their early childhood programs.

Even though Mathematics is one of the core elements in STEAM or STREAM for early learners, this subject still lacks the much-needed attention from educators, parents, and caregivers.

Maybe it’s because children seem to learn to the basics on their own: counting, comparing objects, doing simple reasoning and problem-solving, etc.  If they can do all that just by copying others, why bother to formally teach it?

In fact, it’s vital to set developmental milestones in mathematics and support preschoolers along the way. Continue reading to find out the core reasons why. Afterward, you can create an appropriate math learning environment for young children with seven must-try methods and tips backed by scientific research.

Why is it crucial to build early math skills at the preschool age?

Here are just a few of the benefits of developing math skills at an early age:

Taking all these benefits into account, it’s clear that we should be teaching math skills in the early years. They act as a cornerstone for numerous competencies and life skills, and the stronger this foundation is, the better a child will perform in the future.

Early math is cognitively fundamental. It’s not just about numbers and shapes. There’s reasoning and thinking embedded in what we do in early mathematics that forms a foundation for years to come.”

Whether you’re a childcare professional or a parent, it’s worthwhile to contribute your time and effort in helping preschoolers build a firm and stable foundation.

How can you do that? Read on!

Use these tips to strengthen preschoolers’ budding skills in math.

A bag of books is one of the must-have items for early childhood educators. Children’s storybooks and rhyme books that focus on mathematical concepts should be the top priority. They develop emotional literacy and provide an opportunity to improve primary math skills at the same time.

Here’s a list of stories for kids aged 3–6 that teach the basics about numbers and shapes, counting, adding and subtracting, spatial relationships, size, and measurement, etc.:

To create a math literature library for preschoolers, you might also want to watch the recording from the HiMama Helps webinar Reading and Math: A Dynamic Duo!.

Playing traditional games can facilitate math skills in early childhood if you make mathematics part of the game process. Whether you’re doing in-class or outdoor play-based activities, you can use these to encourage children to develop skills such as grouping, matching, sorting, numeracy, deciphering geometric figures, etc.

Then there are online games. You can move away from passive use of technologies and speed up the formation of basic math competencies in preschoolers with math apps and games on tablets, for example.

While technology isn’t always considered the best option by educators and parents for obvious reasons  ( cybersecurity issues, for instance), there’s plenty you can do with offline games: kinesthetic games, board and card games, or interactive math-focused games.

Here are some examples:

Research has shown that kinesthetic games are great for developing early math ability in preschool learners. Such games significantly improve children’s abilities to classify, match, sort, compare, and enumerate. For example, children can have fun throwing “snowballs”, and learning counting and subtraction while playing.

Card and board games

According to several studies featured in Parenting Science, preschoolers who play board and card games possess better math skills than those who don’t. These games build background mathematical knowledge in young children and boost their abilities for counting, numeral identification, number line estimation, and comparison of numbers.

So, what are the best card and board games to help children learn through play?

Here’s my top-ten list of board games for teaching math in preschool:

As for the card games that offer early math experiences, check out this great free booklet from Stanford!

In Australia, educators introduced a set of specific Preschool Math Games as part of the Northern Territory Preschool Curriculum to support the development of children’s numeracy skills. One way to do this in your own classroom is with math-focused games, such as tangrams, origami, or puzzles.

A tangram game can be used as a manipulatable tool for teaching the perception of 2D/3D shapes and abstract thinking. They introduce geometric forms through play and research has shown that tangrams can enhance children’s spatial sense.

Aside from developing hand-eye coordination, the art of origami improves logical thinking, sequencing, and reasoning abilities in preschoolers.

Puzzles are one of the best childcare toys for preschoolers. Studies have shown that puzzle play is a predictor of profound 2D and 3D spatial transformation skills at the Pre-K age.

Follow the example of a leaves-hunting strategy from the book We’re Going on a Leaf Hunt by Steve Metzger. The author shares his outdoor math experience with his students. They didn’t simply gather leaves of all sizes, shapes, and colors but also engaged in talks. You can promote choice and pattern understanding, as well as other math concepts, during a simple talk.

Taking a walk in the park or in the neighborhood, ask children the following questions:

Choice and reasoning: Which ____ looks the most beautiful to you? Why?

Pattern and order: What house number will go next?

Distance and measurement: Are we closer to that ____ or to this one?

You can also help preschoolers learn shapes while taking a shape walk, for instance. Go outside and help children discover the geometrical figures and shapes that surround them: buildings, playground elements, traffic signs, flags–they’re everywhere!

Arts-and-crafts projects spark creativity and imagination. You can benefit even more, blending them with mathematics and developing shape knowledge and numerical literacy in preschoolers.

Take advantage of mosaic art, one of the fine motor activities, and make shapes and numbers out of everything at hand. You can use shelled pea halves (or any other colored seeds), for example, to craft the numbers from 0 to 9 and then let children trace the shape of a number with a finger, as if “drawing” it. In such a way, they will learn not only the numerical concept but also the basics of writing numbers.

While music should be an integral part of preschool education, songs with numbers and operations can help you change the perspective from looking at mathematics as a tough subject to an entertaining activity.

Here’s a list of song titles and rhymes for young children:

One-to-one correspondence is the ability to recognize a specific number as a symbol for a certain quantity and match objects with the corresponding numbers.

To develop this skill at an early age, you can try such activities as Roll and Cover (a preschooler rolls the dice and covers the matching number with the same amount of buttons) or Count and Cover (you give a number – a child counts and covers the correct number of blocks).

Additionally, engage children in true-life scenarios and activities that both give a rudimentary understanding of 1-to-1 correspondence and teach responsibility. For example, educators can dole out some individual tasks to children, such as giving out pencils/pens or papers to everyone in the classroom. As for parents, they can ask a child to help them set the table for meals and snacks.

Despite being the last on this list, cooking is one of the best math ideas to try with young children. They learn the concept of time, weights and measures, and expand their mathematical vocabulary (words like less, more, add, and so on). Guide them throughout the process and give them such tasks as counting the spoons, and measuring or sorting the dry/wet ingredients.

When baking, use cookie cutters to let preschoolers recognize patterns and shapes. They will also love making hamburgers, cheeseburgers, or other fast children’s meals. In this way, they learn the pattern and one-to-one correspondence.

Along with other school readiness skills, you should concentrate on fostering early math abilities. Without exaggeration, numeracy and math fundamentals form a bedrock for all developmental processes and other learning domains.

If you’re a childcare specialist, add the above activities to your daily schedule, share pictures and reports with parents, and stay on the same page with them.

If you’re a parent, follow this guide and incorporate at least some of these math learning tactics into your habitual time with your preschooler. You’ll enjoy watching your child having fun and improving mathematical skills on the go.

George Tsagas is the owner of eMathZone. He is a software engineer with a computer science degree and deep love for math.