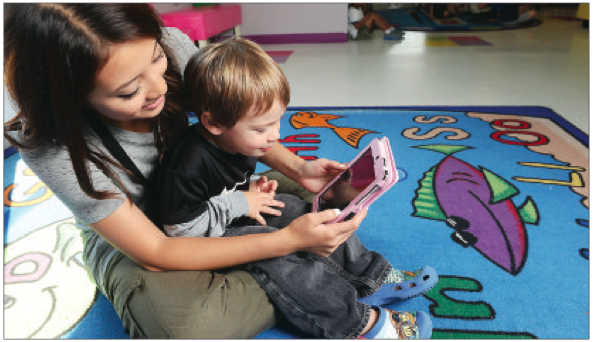 DURHAM -- A new app is allowing Durham parents to share in their child’s day even when they’re not around.

HiMama allows daycares to communicate directly with parents throughout the day by sending photo, video or memo updates that can then be shared with select friends and family.

Ron Spreeuwenberg, co-founder and CEO of HiMama, says the app was inspired by the digital clutter many parents experience trying to organize photos, videos and other memories scattered across phones, laptops, cameras and other devices.

“If you want to snap a photo or write a quick little story about something your kid did that’s what HiMama is meant to be, you can throw it all in there,” he explains, noting many parents are hesitant to post their child’s milestones on social media due to the large networks that would have access to it.

The app evolved into a daycare tool thanks to a friend of Mr. Spreeuwenberg’s, who described the daily written reports about his child’s progress, which were often only seen by one parent or even lost or forgotten amid the daily shuffle of family life.

"We thought there should be a better way of communicating in this day and age,” Mr. Spreeuwenberg explains.

“Parents love it, they’re getting updates in real time. Before they would have to wait until the end of the day to see how their child was doing, now when it’s 10 a.m. and they just dropped their kid off crying they can get a picture showing their child is happy and having fun.”

For daycares, the app offers an efficient means of communicating with parents, which employees of Helping Hands’ seven daycare locations across Durham quickly learned when they implemented the app in May.

“Whenever staff have a chance they can write out what the kids had for lunch, and if 13 of the kids ate everything and ate well they can send that out to 13 parents, and then go in and change the comments just for the two who didn’t eat well or weren’t feeling well, rather than writing out 13 separate reports, which gives them more time to focus on the children,” said Nancy Eickmeier, executive director of Helping Hands, noting parents have also taken to the new app.

“I don’t think we’ve had one negative comment since we started. Parents are so excited because they’re getting real-time comments on what children are doing during the day, so if they have questions they can send that right back on HiMama and get an answer.”

The app is used for everything from alerting parents their child is out of diapers to sharing cute photos of their child playing dressup.

For Mr. Spreeuwenberg, the evolution of the app is not over.

“We’re moving more into a learning and development area,” he said, noting the company is always open to feedback and is focusing on the importance of early learning, such as alerting parents to the developmental significance of their child’s activities and helping daycares tailor learning programs and activities to each individual child.

HiMama is available for free on Apple and Android platforms. For more information, visit www. himama.com.

This article was originally published in Durham Parent, A Metroland Media Group Monthly NewsMagazine. View the article on DurhamRegion.com.

<< Back to HiMama Press